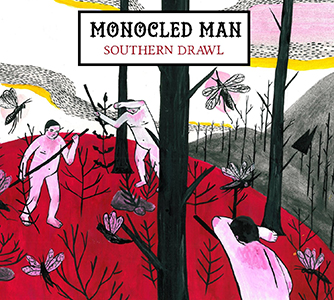 THE NAMES Rory Simmons, Chris Montague and Jon Scott, together as a trio, are all it takes to set the jazz pulse racing. Already prominent in multifarious line-ups and projects, each bring their razor-sharp creativity to this zesty trumpet, electric guitar and drums collaboration.

Monocled Man’s instrumentation may initially appear curious, with no evidence of traditional bass input – but the saturation achieved, due in part to Chris Montague’s signature guitar loop wizardry and Rory Simmons’ intelligent audio editing, offers an absorbing 9-track, 45-minute playlist (all composed by Simmons) which is as full-bodied as it is exciting. Fast becoming a major player on the British scene, Jon Scott delivers both hard-hitting and sensitive drums/percussion which maintain and add lustre to what might be recognised as a grungy New York jazz or jazz/rock soundworld, though a certain Britishness is tangible; and Simmons’ blistering, clear trumpet shines like a beacon – yet, impressively, he never overdominates the collective trio’s offering.

The anticipatory, slightly uneasy momentum of Royalty is heightened by pedalled cluster guitar chords with hallucenogenic cymbals and keyboards; and, in Van Vliet, Simmons’ mournful solo tune pervades the in-cahoots chimes of guitar, electronics and fluttering percussion. Over its seven minutes, Blip finds the trio perhaps at their most cohesive, synths behind the trumpet lead suggesting a brassy ensemble backing and Montague excelling with customary crackling improvisation. Following a brief, reverbed Royalty Reprise, Bullet Nose ends this compelling set with Simmons’ trumpet bristling above the percussive guitar/drum partnership, its irregular rhythms increasingly monopolised to great effect by the drive and dexterity of Jon Scott.

The verve and raw energy of Monocled Man is addictive, especially from a trio (Troyka and Partikel fans are sure to find the rough-hewn vitality here very attractive), and the prospect of live extemporisation is definitely something to look out for (their ‘Jazz in the Round’ performance at The Cockpit Theatre, London, on 20 June 2014, is to be recorded for BBC Radio 3’s ‘Jazz On 3’). Further information, audio samples and purchasing here.