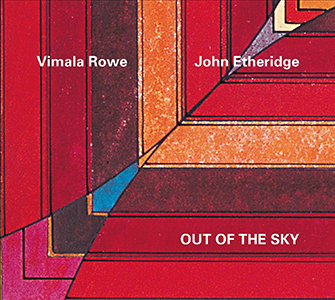 A DUO RECORDING which, indeed, does seem to have fallen ‘out of the sky’, this album brings together legendary jazz/jazz-rock guitarist John Etheridge and soulful singer/songwriter Vimala Rowe in an intimate programme of interpretations and original songs.

Etheridge (whose impressive, hard-working career has included major roles with Soft Machine and Stephane Grappelli) recounts their chance encounter, whilst walking the green spaces of London’s Hampstead Heath, where they discussed “music and philosophy”; and then how, a few months later, when Rowe attended one of the guitarist’s gigs, he invited her up on stage to perform with him: “The audience and I were taken straight to another dimension through the soul, range and passion of her singing.”

Merging their own musical roots and experiences, Rowe and Etheridge have worked together to fashion a repertoire of great distinction – and whether through smoky samba, playful blues or prayerful serenity, the immediacy of this recording frequently suggests a privileged eavesdropping on an intensely-felt, in-the-moment session of chamber jazz and world music. John Etheridge’s known mastery of both acoustic and electric guitars (playing five different instruments in this recording) is confirmed throughout the nine varied tracks, matched by Vimala Rowe’s vocal dexterity, annunciative clarity and emotional focus.

Atmospheric, sustained Syriac Aramaic Prayer, with its calling vocal over an embellished, repeating guitar motif redolent of Ali Farka Touré, might be imagined heard across an exotic, barren landscape, whilst another of Rowe’s co-written pieces, Drive (one of two with Dudley Phillips’ buoyant, underpinning bass) further illuminates the singer’s soulful, R&B angle… and, all the while, these live-feel performances proceed with such secure beauty from both vocalist and guitarist. The combination of Vimala Rowe’s precise Hindustani mantra and John Etheridge’s spacial guitar in his arrangement of traditional tune Ya Kundendu – Saraswati Sloka, is quietly hypnotic – quite a different sound world to Etheridge’s jazz-fusion output.

Released on 28 May 2016, on Dyad Records, Out of the Sky is available from Amazon, iTunes, etc.

A little piece of musical heaven.