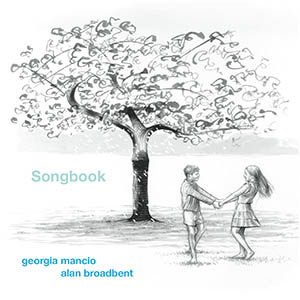 THOSE MOMENTS when, no matter how much of a lifetime’s river of music has passed under the bridge, the eyes involuntarily well up and an electrical impulse charges down the spine… they can only be the sign of something artistically and emotionally significant.

A project which originated in 2013 and has since toured a number of times, Songbook is the work of double Grammy award-winning pianist, composer and arranger Alan Broadbent and sublime vocalist and lyricist Georgia Mancio. A chanced-upon opportunity to perform together, as a duo, blossomed into a magical songwriting collaboration, with Broadbent revealing more and more of his existing instrumental compositions for Mancio to complete with imaginative, poetic storytelling. Their mutual enthusiasm for Great American Songbook writers such as Rodgers and Hart cemented a creative, thematic empathy which shapes this album of twelve new songs with unique beauty and warmth – so much so that, consequently, each one has a ‘timeless standard’ identity redolent of, say, Cole Porter or Jerome Kern.

Supported by the subtly-nuanced and precise rhythm section of double bassist Oli Hayhurst and drummer Dave Ohm, the finesse of Broadbent’s piano and Mancio’s immaculately controlled voice sparkle throughout with expressions of joy, humour, tenderness and melancholy. Alan Broadbent’s lush arrangements (having worked on a larger scale over the decades with the likes of Irene Kral, Woody Herman, Natalie Cole and Diana Krall) are just as eloquent in this chamber setting.

Georgia Mancio enfolds each episode of this collection with both technical security and, just as importantly, an obvious affection. She possesses one of the most inviting, endearing voices on the current scene, illuminating The Journey Home‘s soft swing with clarity and elegance, then adding pizzazz to shuffling bossa tune Someone’s Sun; and Broadbent’s chordal and melodic deftness complements the vocal shaping magnificently. The Last Goodbye – the first composition presented to Mancio – is brightly wistful, as is Cherry Tree which charmingly portrays the tapestry of life (reflected in Simon Manfield’s front and back cover illustrations, and also in Alan Broadbent’s exquisite ornamentation). Each track becomes a favourite, Small Wonder‘s succinct lyrics making way for blue-sky piano trio delicacy; and One for Bud celebrates a passion for Bud Powell with a brisk be-bop delivery from Mancio which would be at home in any classic song-and-dance movie (“I went to work – 9 to 5. I concentrated on the boss and his jive. His patter and zeal held no inch of appeal compared to Bud.”).

Hide Me From the Moonlight‘s emotional weight is superb, its descending/ascending chromatics and tenuti making it a romantic stand-out. Heartwarming, ‘Que Sera, Sera’-style Forever is Mancio’s playful take on life, concluding with “One day you find that you have all the answers but nobody asks you the questions”; and ease-back Close to the Moon might easily have been in Sinatra’s repertoire. Where the Soft Winds Blow blithely sails to a memorable melody written by a 17-year-old Alan Broadbent; chattering calypso Just Like a Child‘s slick, rhythmic vocal could be central to a much-loved musical; and serene Lullaby for MM (Broadbent, here, writing to Mancio’s personal dedication to her late father) somehow evokes the touching reminiscences of Michel Legrand.

There’s the sense of an hour standing still with this recording (skilfully produced by Andrew Cleyndert), such is its affecting dedication to craft – and certainly a highlight of 2017 so far. As just one of many attractive lines states: “I see life through your eyes and take first prize”.

Released on 23 April 2017, Songbook is available from Georgia Mancio’s website and Amazon.