IN HIS LINER NOTES to Our New Earth, esteemed drummer Bill Bruford references the dual basis of this 2CD release from the Sirkis/Bialas IQ (International Quartet): the challenge of improving our turbulent world, and an exploratory approach to music – “you don’t play what you practiced anymore”.

Released 20 November 2019 and available as CD or digital download at MoonJune Records. 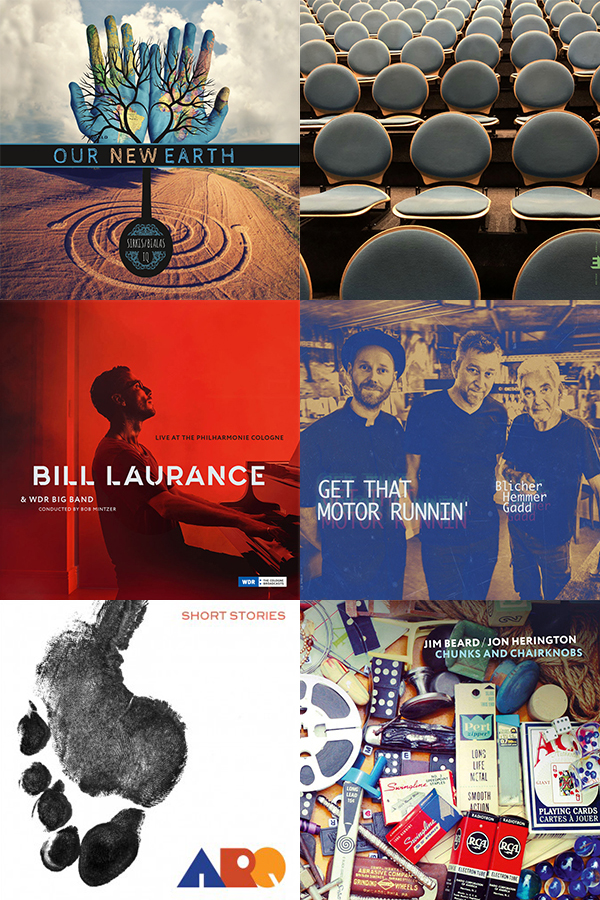 Reflecting the hustle and bustle of its South-East Asian marketplace title (and reinforced by a lively cover illustration), this ambitious, one-hundred-minute fusion of jazz, rock and world music has at its core a vibrant trio, with Dharmawan joined by the brilliance of bassist Yaron Stavi and drummer/percussionist Asaf Sirkis. But the beautiful eclecticism of contributions made by the pianist’s guest musicians – including clarinettist/saxophonist Gilad Atzmon and electric guitarist Mark Wingfield – elevates these eleven, expansive tracks into a cornucopia of often unexpected riches.

Described as a cultural icon in his homeland, performer, composer and arranger Dharmawan’s expertise in bringing together these various strands is impressive; and with a breathlessly flamboyant piano technique, he is clearly an inspirational leader. Title track Pasar Klewer brims with exotic colour, Mark Wingfield’s characteristic, high-velocity guitar the ideal partner for the busyness of Dharmawan, Stavi and Sirkis; yet it is also imbued with the magical sound-imagery of chants, bells and Aris Daryono’s three-stringed rebab. Glad Atzmon’s clarinet deftness (always with such a distinctly ‘vocal’ expression) soars in Spirit of Peace, a relentless, smouldering dance suffused with Nicolas Meier’s glissentar improvisations and Asaf Sirkis’ konakol voicings.

It’s an adventure of mystery and discovery, with the sense of pulling back the curtain to reveal the next chapter – so Atzmon’s superb soprano sax outpourings over vigorous gamelan orchestra and free-jazz piano trio are just a small part of the story of thirteen-minute Tjampuhan; melodically uplifting Frog Dance (with a field recording of the Balinese variety) is irresistible; and Asaf Sirkis’ own Life It Self enjoys a hard-driven prog groove perpetuated by the heavier aspect of his drumming and the stratospheric, pitch-bent guitar of Mark Wingfield.

Robert Wyatt’s Forest and the trio’s composition London in June include the theatrical vocals of Boris Savoldelli; and Dharmawan’s arrangement of traditional tune Lir Ilir is introduced by the decorative voice of Peni Candra Rini before it cranks up into full-throttle piano jazz embellished by glissentar. Amidst such intensity, moments of repose can be found in elegant Bubuyu Bulan and Purnama, whilst the expanded, instrumental version of Forest which closes the programme – featuring both Dharmawan and Wingfield, effectively enhanced by electronic shooting stars – possesses a transcendental magic.

Bask in its cosmopolitan outlook and astounding musicianship.