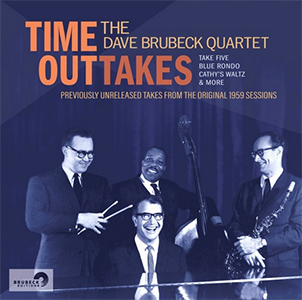 INDELIBLY STAMPED on many a heart, 1959’s Time Out – followed by Time Further Out in 1961 – propelled pianist Dave Brubeck’s quartet with alto saxophonist Paul Desmond, double bassist Eugene Wright and drummer Joe Morello into jazz and pop immortality, helped by the still-ubiquitous Take Five. It became the first jazz album to sell a million copies.

Previously-unreleased recordings from the four sessions in the summer of 1959 have now been issued in Time OutTakes – the first output on the family’s Brubeck Editions imprint. Revelatory nuances are heard in alternative takes of five of the original album’s seven tracks, alongside two recently discovered numbers, plus fascinating audio insights into conversations between the artists and their studio engineers. As son Darius Brubeck explains, “Naturally, the takes chosen for release… were the most polished performances of this newly composed music. Sixty years later these ‘heads’ are familiar and this time around we can focus on the great improvisations that were held back because of little mistakes in the pre-composed sections”.

The quartet’s celebrated brand of American ‘West Coast cool’, an important waymarker in jazz ancestry, flings open the door on this archive with Blue Rondo à la Turk (whose 9/8 metre Brubeck famously heard from Turkish street musicians, a year earlier). Here, Paul Desmond’s swinging improvisations feel bluesier, less restrained; and the piano explorations are more angular, so much so that the album’s much-stated polyrhythmic experimentalism – initially unnerving, in a commercial sense, for label Columbia – is brought into sharper relief, including a hard-hitting conclusion. An elegant stride-piano difference to the opening of Strange Meadowlark (wait for the ‘attempts’ in the later banter!) is taken up by Desmond’s signature softness. How his improvisational angle changes things; and Brubeck and his rhythm section are jauntier and less inhibited, too (maybe with a chromatic-piano whiff of Leonard Bernstein’s ‘Bali Hai’ at the close).

Take Five another way (it took many attempts to land on the final hit recording) turns out to be pacier, perhaps even hurried to our ears. The 5/4 piano figure obviously sets the groove, but it’s the toms of Morello (whose soundcheck playfulness gave birth to the idea) that create the ‘jam’, particularly when he weighs in with a seemingly more fervent drum solo than was first published; and Desmond is as unflappable as ever. Maybe Three To Get Ready is more akin to expectation, though there’s a perceptible ‘wink in the eye’ from the four – and its breezy disposition is embellished anew, Brubeck taking wonderful liberties with his rubato. Rounding off the Time Out tunes is Cathy’s Waltz, the title corrected from the original’s mistakenly-printed ‘Kathy’, for its then five-year-old dedicatee-in-a-tutu, Brubeck’s daughter. Still with an ascending phrase that feels like the inspiration for Lennon & McCartney’s ‘All My Loving’ of 1963, it whirls and skips to Desmond’s free-spiritedness.

Interestingly, Pick Up Sticks and Everybody’s Jumpin’ were captured in single takes at the sessions, hence no alternatives in this release. Instead, we hear fast-swinging I‘m in a Dancing Mood, whose percussive bossa episodes are evocative of the period; and Watusi Jam – a spontaneous piano trio number found unmarked on the session tapes – which is initiated by Wright’s bass groove, again featuring Morello. The frisson of collaborative adventure in this is palpable. Did they know, then, they were onto something?

Dave Brubeck passed away in 2012, just a day short of his 92nd birthday. After all these years, and admittedly with a good measure of nostalgia, to hear those Time Out tracks ‘disrupted’ by ’new’ improvisations and detail sends an involuntary tingle down the spine. So do the final track’s fascinating few minutes of back-and-forth quips (Brubeck: “Man, I can’t play it that good again… See, what’d’I tell you?… I didn’t even like that!”). So particularly for fans, this turning back of the clock to the 1959 studio – with interesting CD-booklet insights from the family, both on the pieces and the players’ characters – feels pretty special.

Released on 4 December 2020, to mark the centenary of the great man’s birth, Time OutTakes is available at Amazon, Apple Music, etc. 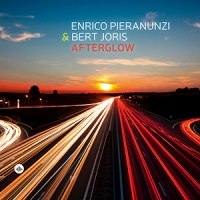