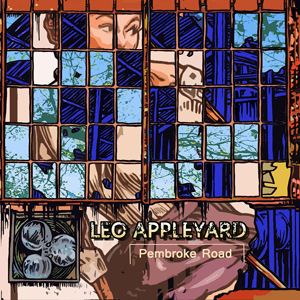 WHAT BETTER ENDORSEMENT of a debut album than the encouraging words of jazz guitar legend John Etheridge: “Imaginative and beautifully crafted compositions and performance with a strong emphasis on great sound quality.”

Currently in his mid-twenties, London-born electric guitarist, composer and sound engineer Leo Appleyard has already enjoyed an active and varied start to his career, frequently appearing at major UK and international venues and festivals. Now, recording with long-time colleagues and mentors Duncan Eagles (tenor sax), Max Luthert (bass) and Eric Ford (drums) – trio Partikel in another guise – and guest Neil Yates (trumpet, flugelhorn), Appleyard has created a bustling sequence of originals for quartet/quintet which genuinely capture the imagination. He has written specifically with these musicians in mind (judiciously employing echoes/effects) in the knowledge that the band’s collective understanding and affinity might produce improvisatory fireworks – and it’s not long (track 3, to be precise) before the full excitement and character of this set is emphatically ignited.

The leader’s command of both chordal and solo dexterity (think Jez Franks, Kristian Borring) is introduced in curtain-raiser The Homeless Wizard, sharing unison lines with tenorist Eagles as well as duelling in improvisation. Appleyard isn’t afraid to switch tempi and mood (one of the joys of his writing), and Eric Ford’s solid, bright percussion bolsters the snappier sections. Trumpeter Neil Yates augments the line-up in Mass, its swooning, echoic horns gliding high above expectant, cinematic bass-and-drums impetus; and The Cleaver excellently showcases the accomplished soloing creativity of both Appleyard and Yates, the swinging verve of this extended piece becoming increasingly infectious, including an effective udu touch from Ford.

Anywhere South sparkles confidently – a real winner of a quartet number which, again, indicates Appleyard’s compositional maturity, tempering its high energy with brief reflections (walk into a jazz bar with this at full tilt, and you’d be hooked); guitar soloing here is exceptional, both in terms of pace and inventiveness. The contrasting, subtle blues tranquillity of Mantra is tangible, Eagles’ gorgeously mellow tenor weaving lazily in and out of exquisitely-coloured guitar chords; and title number Pembroke Road (a reference to the tucked-away Welsh studio which gave birth to this recording) is an assured full quintet episode, gleaming with individual extemporisation and radiating an openness which perhaps reflects the influence of that rural Pembrokeshire landscape.

The pliant strings of bassist Max Luthert announce Walsio, a breezy, carefree gambol with the occasional, intriguing hint of reservation. Appleyard’s desire for an initial theme of childlike simplicity is evident, though the quartet soon enhances this with pleasing rhythmic and harmonic divergence. Familiar Victor Schertzinger standard I Remember You closes the set – couched in soft watercolour impressionism, its miniature status certainly creates the desire for more.

Partisans guitar supremo (and former tutor) Phil Robson concisely sums up Appleyard’s aptitude and future potential: “Leo is a fab guitarist and composer, definitely a real natural! This debut CD should firmly establish him as a new voice on the scene.” On the strength of these performances, it’s easy to concur.

Pembroke Road is issued on the F-IRE label and available from Proper Music.

AN INCANDESCENT elegance pervades this debut release from bassist Max Luthert – a sumptuous and mature sextet recording, richly coloured and layered by the creative possibilities this particular collaboration engenders.

Very much a respected player on the London jazz scene, Luthert is joined by Gareth Lockrane (flutes), Duncan Eagles (tenor sax), Séb Pipe (alto sax), Matt Robinson (piano) and Dave Hamblett (drums), who warmly bring to life these nine original compositions in which the leader has challenged himself to write for larger ensemble. The flute and dual sax combination achieves strikingly effective textures as mellifluent unison lines splay into opulent, three-way harmonic expressions, whilst also providing the freedom to extemporise individually – and, with an overarching sense of joie de vivre, this ‘little big band’ has much to say.

Title track Orbital perfectly illustrates the strengths of the collective with an ebullience which crackles to snappy, tricksy rhythms through which Duncan Eagles’ deeply-toned tenor both breezes and luxuriates. The mood swings in this are delicious, as is the crispness of the interaction, due in no small part to Dave Hamblett’s typically incisive though equally flamboyant drumming. Cloud on Cloud is characterised by flautist Gareth Lockrane’s mellow, slurred phrasing both floating above and melding with alto and tenor to create a luscious, dreamy ballad; and the subtly-infused Indian flavour of Assam‘s melodies and arrangements dissolve to afford space to Luthert’s distinctively-resonant bass soloing and the tabla-like hollowness of Hamblett’s carefully-weighted rhythms.

Grand Designs ripples to the complexity of shared and overlaid improvised woodwind phrases, Matt Robinson enhancing Luthert’s authoritative momentum with sparkling piano runs. In contrast, the most delightfully spacial Quiet December features the haunting tenor soloing of Eagles and the eloquent, gossamer fragility of Luthert’s imaginings (each attuned to the other, due to their close association in trio Partikel); and ascending tenor motifs bring an initial perky briskness to The Edgewall, its later, edgy sections finding Luthert’s mobile bass leaning more towards a Dave Holland sound world.

The majority of this session might well comfortably sit in the background at a dinner party, such is its unabashed equanimity – but, boy, how it lives and breathes when turned up loud and given the opportunity to fill a room! Released on 27 October 2014, information and audio samples can be found on the dedicated Orbital page of Whirlwind’s website.

WHEN A DEBUT ALBUM sounds this good (correction: this spectacular), you simply cannot ignore it! Relatively new to British and international jazz audiences, drummer and composer Ollie Howell’s first release comes as something of a revelation.

The initially curious title, ‘Sutures and Stitches’, soon becomes clear as Howell openly shares his recent history of numerous neurosurgeries and, importantly, his determination to take the positive from these experiences and channel them musically. Indeed, this collection of self-penned post-bop originals (plus an arrangement of Dear Old Stockholm) is a remarkably confident and mature first release, boasting a strong personnel: Mark Perry (trumpet), Duncan Eagles (tenor sax), Max Luthert (double bass) and Matt Robinson (piano). With endorsements from renowned drummer Jimmy Cobb (“He’s loaded with talent!”) and music legend Quincy Jones (describing Howell as “an unbelievable drummer. So creative I couldn’t believe it. This kid is a 360-degree beautiful young cat that I believe has what it takes to make a life out of music.”), this is surely a great curtain-raiser to a glittering career to come.

Later On opens the album with aplomb, Howell instantly displaying his crisp and direct attention to compositional and drumming detail, Robinson hitting the advance button for Perry and Eagles to take flight with characteristic shared brilliance. There’s a cordial spirit to the lively Beyond, its opening unison melody feeling welcomingly familiar, soon stepping up a gear for a terrific tenor solo, Robinson’s accomplished piano then driving on and on to a cross-rhythmical hand-clap/percussion conclusion.

Short solo intros from each band member precede five of the tracks – not mere fillers, but concise lead-ins to the pieces which follow, beginning with Howell himself on rapid, perfectly-tuned toms, ahead of So Close, So Far. With its finely-balanced sound, and possible imaginings of a big band arrangement, Perry’s assured flutter-tongueing blazes high above the tight ensemble accompaniment. Lively miniature, Angry Skies, leads to Perry’s melancholy trumpet intro to 19th Day, a wistful tune beautifully carried by Eagles’ rich tenor, partnering with Perry to great effect. At almost nine minutes, A World Apart is a great centrepiece to showcase the raw, combined talent of this quintet – Howell skilfully directs the band to reach for that higher rhythmic, melodic and improvisational plane… result: success!

Max Luthert’s sonorous bass intro to For Anya is a worthy preamble to its delicate bass- and piano-led dedication. They finds Ollie Howell on fine form, bringing shape to Perry’s and Eagles’ searching solos, Luthert again with a lyrical bass addition. Eagles’ brief sax intro takes us into the gorgeously introspective Two Sides, tenor and piano creating between them such an appealing dialogue. Traditional tune Dear Old Stockholm receives a feisty arrangement, all players pushing at its animated energy. Howell’s drum display is so dynamic, so exact, whilst Robinson and Luthert perpetuate the heady groove. Finally, a particularly limpid piano intro leads to A Hollow Victory, Eagles’ and Perry’s unanimous melody giving way to their own thoughtful solos – a gentler, considered finale to a superbly creative and rounded album.

Released by Whirlwind on 23 September 2013, Howell is touring ‘Sutures and Stitches’ until 3 December – and one can imagine (or, better still, experience) live pyrotechnics of the highest order! Details and samples here.

ALBUM REVIEWS are now MOSTLY periodically selected at and written for publication on the LondonJazz News website and referenced here (further information).

COMMENTARY on album releases and other music-related activities (including #recentlistening) continues here and at Twitter. 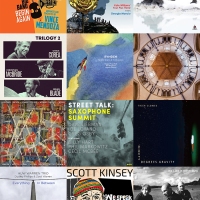 PROFESSIONAL WRITING AND EDITING FOR MUSICIANS