BILL EVANS (1929 – 1980) and the piano. Inextricably connected, or so it would seem. But this new recording from Portuguese guitarist Ricardo Pinheiro, Dutch drummer Eric Ineke and Italian double bassist Massimo Cavalli takes us along different avenues to explore a number of the revered pianist’s creations, alongside works by Michel Legrand and Leonard Bernstein.

Individually, the members of ‘Pinheiro – Ineke – Cavalli’ have built long-ranging careers and discographies – see links below. Together, they share a number of recordings, including 2018’s Triplicity and ensemble releases such as Is Seeing Believing? (a quintet with saxophonist David Liebman and pianist Mário Laginh) and Lisbon Sunset (a collection of jazz, poetry and improvisation with poet Barry Wallenstein, pianist Luís Barrigas and drummer Jorge Moniz).

In truth, guitar encounters with Bill Evans’ catalogue have happened before, including John McLaughlin’s ambient-styled acoustic album of 1993; and Evans recorded with both Kenny Burrell and Jim Hall, the latter in duo albums Undercurrent and Intermodulation. Through the timbres and dynamics available to this particular trio, six of the pianist’s compositions are texturally and rhythmically refashioned in a collaboration that might cursorily be catalogued ‘easy-listening jazz guitar trio’. But, speaking from experience, these are precise interactions which benefit from a greater focus to appreciate their inner workings.

Peri’s Scope launches the main programme of Evans interpretations, the original‘s piano-trio jauntiness translating into a fleet, foursquare expedition that ripples with crisp percussion, fast-walking bass and the lissome extemporisations of guitarist Pinheiro. There’s a similar twist of momentum for Very Early (from Evans’ ‘Moon Beams’ album with Chuck Israels and Paul Motian) where its lazy, hazy demeanour is alternatively painted in lighter, gossamer shades – the sense of ‘conversation’ even more palpable as the trio members share ideas and encourage snippets of arco bass, percussive sparkle and melodic freedom. Perhaps even more interesting is how they convey Interplay (fronted by Freddie Hubbard and Jim Hall in Evans’ bustling early-Sixties recording) as a blithe amble, nevertheless kept on its toes by the crackle of Ineke’s teasing snare offbeats.

It’s difficult to imagine that most enduring of Bill Evans ballads, Waltz for Debby, away from the master’s sublime, mellow pianism – but the trio treat it with reverence, Pinheiro’s elegant chordal shapes carrying it through into a newfound, joyful and almost pirouetting waltz brimming with sprightly extemporisation. Turn Out the Stars (later Evans) and Time Remembered are merged into a ten-minute-plus reading that, depending on your view, either becomes an immersive discovery or can dissolve into the background; either way, its eventual development into freer territory is attractive as Pinheiro’s use of overlaid, sustained effects is matched by bass and drum turbulence.

Bookending the Evans revisitations are two evergreens of stage and screen, once recorded by the pianist – Michel Legrand’s You Must Believe in Spring (from 1967 French movie ‘The Young Girls of Rochefort’) and Leonard Bernstein’s Some Other Time (from the 1944 musical ‘On the Town’). Divorced from its romantic piano (and orchestral) origins, the Legrand enjoys its unexpected excursion into a Sixties-pop-riff kinda groove; and Bernstein’s sentimental classic – recorded by Tony Bennett and Evans – is ‘vocalised’ here by subtly pedalled guitar.

Though completely accessible, it may take a while to get deeper under the skin of Turn Out the Stars – but ‘Pinheiro – Ineke – Cavalli’ have both the integrity and the charm to enable us to catch these classics in refreshing, new light.

Released on 30 April 20211 and available from Challenge Records and Proper Music. 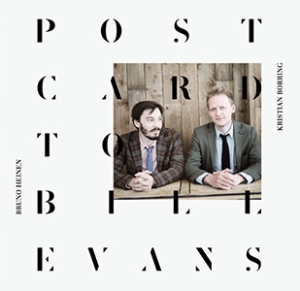 THE POSTCARD reference in the title of this new duo release from London-based artists Bruno Heinen (piano) and Kristian Borring (guitar) is significant, as there is a background thread which demonstrates the power and influence of continuity; the passing-down of musical brilliance and knowledge to future jazz generations.

A VERITABLE CORNUCOPIA of musical influences colour the jazz of this lively second release, ‘Global’, from Midlands-based quintet, Interplay.

From the outset, it’s clear that this five-piece’s intent is to offer a programme of upbeat, diverse and accessible jazz – the established line-up of Alan Wakeman (reeds), Richard Baker (trombone), Neil Hunter (keys), Adrian Litvinoff (bass) and Dave Balen (drums) presenting no less than eight impressive Litvinoff originals, as well as their own interpretations of favourites from such luminaries as McCoy Tyner, Abdullah Ibrahim and Pat Metheny.

At the heart of the playlist, Litvinoff’s raga-style Weightless conveys the cosmopolitan flavours to be found here, Dave Balen’s beautifully-weighted tabla producing a mesmeric rhythm from which Alan Wakeman’s gentle, keyboard-backed soprano flows so freely. Autumn Magic is a breezy outing (though also with a darker, pensive look towards Winter), illuminated by Wakeman’s bright shining flute and Richard Baker’s nimble-yet-smooth trombone soloing. Fashion Statement indicates more of a fusion feel, due to its strong organ/synth presence and composer Litvinoff’s electric bass, whilst Su Baille Nuevo dances spiritedly to a mid-tempo flamenco rhythm which increases in intensity as Baker and Wakeman improvise off each other.

The Cuban All Star Band’s classic Amor Verdadero takes on a higher-energy tempo here, driven along by drums and congas, bristling Latin piano from Hunter and a strong pairing of trombone and tenor. The quintet’s arrangement of McCoy Tyner’s Contemplation sounds particularly fresh with Baker’s sonorous trombone lead, rich tenor soloing, and lavish major/minor piano that its composer would be proud of! Adrian Litvinoff’s acceptance of older age (by his own description) brings warmth and charm to Elders, a gentle, classic-sounding number which includes the clarity and lightness of his own double bass soloing. Shapeshift skims along gleefully to Balen’s and Litvinoff’s up-tempo rhythm, tenor sax and trombone gliding above Hunter’s expert organ and piano work; and Pat Metheny’s Hermitage (sans guitar) eases us out pleasantly with it’s mellow, homely and easy-going nature.

Interplay have developed a reputation over the past few years for bringing contemporary jazz to a wider audience, performing live at numerous gigs, festivals and community events. ‘Global’ pulls together the band’s considerable combined experience (their individual CVs are pretty staggering!) to create this joyful and contrasting studio recording.

For further information, and to purchase, see interplayjazz.co.uk and Silvery Records