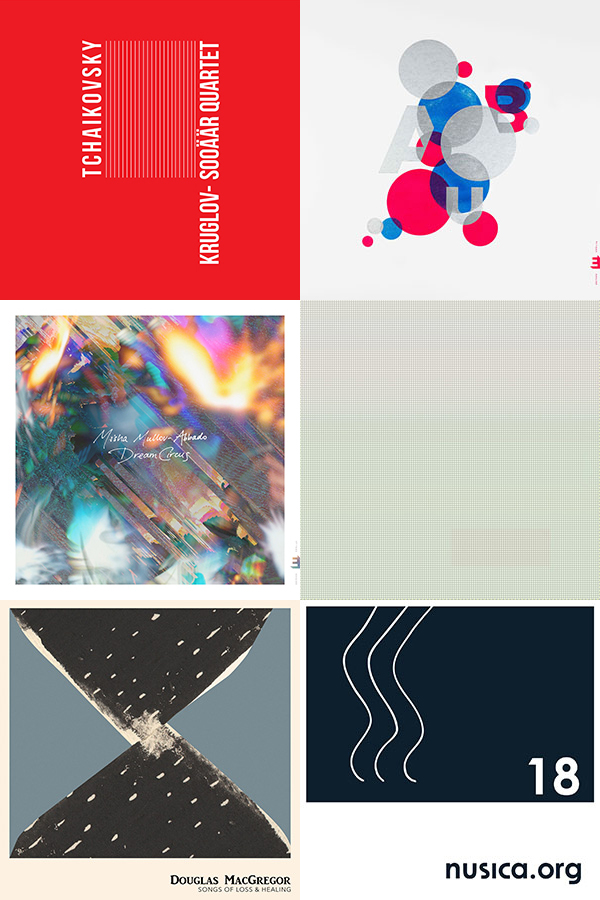 IT SAYS MUCH about the rude health of the British contemporary jazz scene when an album such as London-based Misha Mullov-Abbado’s Cross-Platform Interchange makes its arrival with this level of young, high-spirited musicality.

The bassist’s second album – “dedicated to my love of trains, travelling, movement and constantly evolving musical journeys” – is a breath of fresh air as eight original, often European-inflected compositions offer an entertaining ‘itinerary’ of verve, lucid beauty and obvious humour, all delivered by a three-horn septet augmented with guest musicians. Mullov-Abbado’s musical progression comes as no surprise (the son of acclaimed classical artists Viktoria Mullova and the late Claudio Abbado), yet he has already embarked on his own creative route which appears to take in so many influences.

These fifty-seven minutes are, indeed, something of an eclectic sightseeing adventure, with the winding, bluesy, ‘in-crowd’ bass-groove of Shanti Bell announcing its departure, whilst a steam-filled segue accelerates into high-speed Mariachi folk tune No Strictly Dancing, characterised by James Davison’s blistering trumpet and the hissing perpetual motion provided by drummer Scott Chapman and percussionist Elad Neeman. Mullov-Abbado explains that these compositions have been written, performed and honed over a two-year period, so they take inspiration from different sources. The echoic, tumbling-sax atmospheres of Waves divert into a pictorial vista stretching for miles; and its deep, reedy, dance-band elegance suggests romantic evocations of early 20th Century rail travel (dedicated with love to the bassist’s stepfather, Matthew Barley, whose cello adornments can be heard here); and Still, Hidden Morning‘s hazy aurora again tumbles into swiftly-travelling percussiveness, illuminated by Liam Diunachie’s deft, US-soul piano improvisations as well as the vividly-phrased, fluctuating impressions of fleeting landscapes from saxophonists Matthew Herd and Sam Rapley, and James Davison on flugel.

Released on 19 May 2017 and available as CD or digital download at Bandcamp. 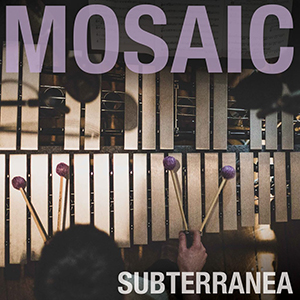 VIBRAPHONIST Ralph Wyld can be found gracing many a contemporary jazz line-up (including those of Rick Simpson, John Martin and Tim Richards), so it’s good to see his own sextet, Mosaic, stepping out with debut album Subterranea.

Ralph Wyld was announced by Edition Records and the Royal Academy of Music as the 2015 winner of the Kenny Wheeler Jazz Prize (following in the footsteps of Josh Arcoleo, Reuben Fowler, Lauren Kinsella and Misha Mullov-Abbado), thus providing the opportunity to record this release at Real World Studios.

Here is an album which often mysteriously, sometimes quirkily unfolds its fifty minutes of treasures through vibes-anchored expressions which might evoke Terry Riley or Pierre Moerlen, combining them with the kind of brash, theatrical mischievousness heard in the music of, say, Michael Chillingworth or George Crowley. Wyld’s sustained, modulating colours deftly permeate the evolving instrumental timbres; and with a markedly live, almost folk-band sonority, the sound is particularly direct.

White Horses, described as being influenced by Steve Reich and much-missed Steve Martland, holds the kind of anticipatory thrill of waiting for breakers to crash as the darkly-brooding vibraphone swell repeatedly erupts into foamy crests of trumpet and clarinet amidst a tumultuous bass-and-percussion rhythm (an exciting audio/visual connection can be envisaged); and title track Subterranea‘s luminous, undersea weightlessness reveals exquisite finds of double bass and bass clarinet extemporisation as Wyld’s measured touch supports throughout, and shafts of harmonic light are crafted with unusual tonal blending. Keira Konko (Hill of Peace, in The Gambia) is a multi-faceted, twelve-minute episode which balances lyrical cello with chirpy trumpet and sparkling vibes, its strongest melodic episode imaginable as a documentary theme tune; and Cryptogram (whose basis, Wyld states, is melodically and chordally derived from his name) is fidgety and excitable, with a bristling propulsion only stopped in its tracks by syncopated hiatuses – a cheeky old thing!

But one of the significant discoveries, at three points across this album, is the ensemble’s skill in serene abstraction. Interludes I and II, plus a Reprise, are interspersed amongst the larger works with a slow, otherworldly beauty reminiscent of Brian Eno; and the fact that these are overlapping acoustic voices makes them all the more special (perhaps a concept for the future).

The pleasure here is in navigating a route through this album’s unpredictable, winding paths. Where might they take you?

Released on 18 November 2016, Subterranea is available from Edition Records, as CD or digital download, at Bandcamp (album trailer here).

THE GRACEFULNESS of the cover art speaks volumes about the creative balance that shines out from Skyline, the debut septet recording from Cambridge-born trombonist Tom Green – a collection of expansive new compositions coloured by ever-changing hues, light and shade, allowing each of his players considerable freedom in improvisation.

The robust four-horn line-up of Green, Sam Miles (tenor), James Davison (trumpet/flugelhorn) and Matthew Herd (alto/soprano) offers impressive big band dynamism and breadth, yet also a supple luminosity which breathes life into the trombonist’s seven originals, plus one arrangement of a much-loved standard. Still in his 20s, Tom Green’s credentials are indubitable – the Royal Academy’s first postgraduate trombonist, winner of the 2013 Dankworth Composition Prize (leading Dame Cleo to declare his work as “some of the most exciting original new music I have heard for a long time”) as well as a 2014 Help Musicians UK ‘Emerging Excellence’ award winner. And his mercurial brass dexterity is a delight, ranging from blistering riffs to svelte tonal lyricism.

Initial impressions are of crisp arrangements and sharp execution, typified by the opener, Sticks and Stones. It’s brisk and propulsive, with layers of textures and ideas over which Green and James Davison solo brightly; and gear changes throughout this album (such as the brief trombone and piano contrapuntalism here) add greatly to a sense of variety, not unlike the fluctuations of light on a plain caused by fast-moving cumulonimbus. The dilatory drawl of a Deep South-suggested horn preamble to thirteen-minute Equilibrium opens into an addictive bossa of moody twists and turns, bejewelled with Sam James’ precise piano expression – and then, all at once, it gleams to lush arrangements and, also, cacophonous scribbles which Green glides through with proverbial swan-like ease.

Arctic Sun swings delicately to the rhythm of bassist Mullov-Abbado and drummer Chapman, building towards elaborate, soaring soprano from Matthew Herd (a saxman who always displays a real penchant for pushing the envelope). There are shades of contemporary pop ballad in the memorable phrases of Peace of Mind, Green fluent in his extemporisations; and easy-going Mirage prompts fine soloing amongst the exacting full horn scoring.

Hoagy Carmichael’s perennial favourite, Skylark, is both chirpy and breezy in Green’s hands, though perhaps loses a little of the charm of mellower renditions; and Winter Halo might easily conjure luminescent landscapes and vacillating murmurations (startling rapidity of soprano bird calls from Herd!), including another of those delectable duo interludes – Sam Miles’ rich tenor against pellucid bass. DIY is an irresistible closer, pictorialising the brash, processional jazz of New Orleans and encouraging overlapping showy solos from all quarters, as well as more examples of the leader’s flair for snappy, complex arrangements (no doubt a crowd pleaser on their recent launch tour).

As a jazz release, this displays so many hallmarks of a classic, seasoned ensemble. As an ambitious debut from a young, close-knit septet, it’s a striking first statement with great potential for future development. And, above all… such an upbeat listen!

Released on 2 February 2015, Skyline can be purchased directly from Spark or Tom Green’s website.